Manchester United have made contact with France midfielder N’Golo Kante’s advisers about a move from Chelsea, but any deal is dependent on the 29-year-old taking a big cut on his £300,000-a-week wages. (Mirror)

Manchester United are also preparing a final £90m bid to sign England midfielder Jadon Sancho, 20, from Borussia Dortmund this week having missed out on Gareth Bale and Jack Grealish.(Mail)

Paris St-Germain have been in touch with Chelsea over signing Italy midfielder Jorginho, 28, on loan. (Telefoot, via Mail)

Bournemouth’s Norway forward Joshua King, 28, is being monitored by Tottenham Hotspur as they look to sign a striker before the transfer deadline. (Telegraph – subscription required)

Aston Villa have made a bid of about £9m for Copenhagen’s Danish defender Victor Nelsson, 21. (Ekstra Bladet – in Danish)

Arsenal and Gabon striker Pierre-Emerick Aubameyang, 31, has said he turned down the chance to sign for Barcelona as well as several other clubs to stay with the Gunners.(Canal+ via Metro)

Leicester City are planning a move for Torino’s 23-year-old Brazilian centre-back Gleison Bremer, who is also a target for Everton. (Football Insider)

Manchester City have offered 23-year-old Ukrainian Oleksandr Zinchenko, who can play left-back or left-wing, to Barcelona. (Mundo Deportivo – in Spanish)

Barca are close to completing the signing of Sergino Dest from Ajax, with the United States right-back, 19, set to have a medical in Spain on Monday. (Mundo Deportivo – in Spanish)

Bayern Munich feel betrayed by Ajax because they agreed terms with Dest weeks ago but could not find a compromise with the Dutch club. (Sport – in Spanish) 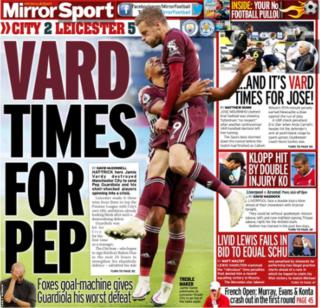 Would he trade careers with Reggie Jackson?

Would he trade careers with Reggie Jackson?

After Mandeep, five other COVID-positive hockey players shifted to hospital

How Damian Lillard took advantage of Kristaps Porzingis to tie his...

ABOUT US
Green Parrot Sports is your latest, sports entertainment and biography website. We provide you with the latest updates on sports people around the world
Contact us: info@greenparrotnews.com
FOLLOW US
© Greenparrot Sports